A few months ago we had a great opportunity to create some event favors for two events in our home town.  The first was a “Bloom Favor” that was part of the table sponsorship bag.

A quick video of applying moss to the bases, once they were constructed.   These were made for  the “Bloom Favor” soaps.  All the details came together so nicely for these cute soaps that were part of the table sponsor bags.  After the bases were built and the soaps were finished, we placed them on a foam piece that was cut to size for the base of the soap and then onto the bases.  The last step was to wrap them and tie them with a gold ribbon.  An information card was placed on the outside base. 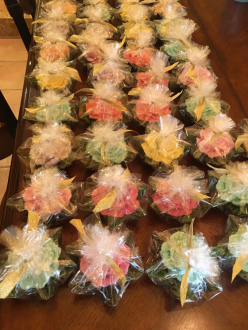 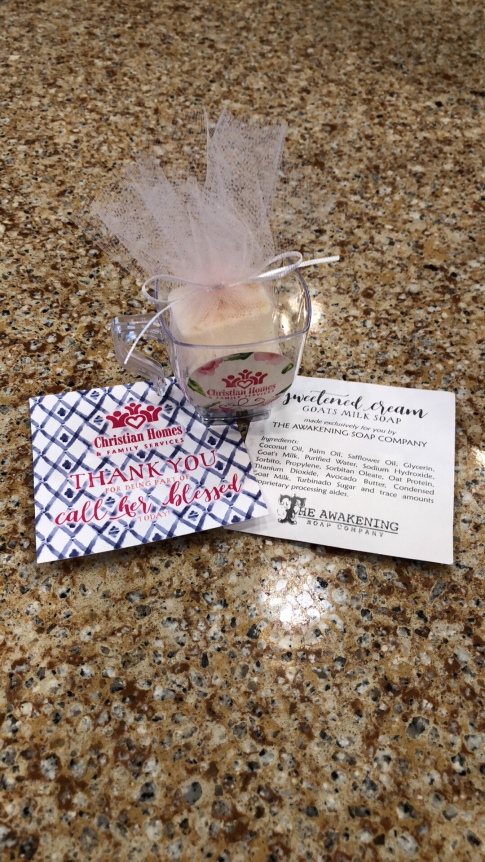 The second favor was an “Iced Coffee” inspired favor for an event just a few weeks later. Its was created by placing a “cream ice cube” soap that also contained turbinado sugar.  The soap was wrapped in a light pink tulle, tied with a ribbon and placed in a mini coffee mug that had coffee beans in the bottom.  A label was created and placed on the cup, as well as a a mock cocktail napkin that had the event logo and a quote from the speaker on the front and our information on the back.

Both of the favors were created to fit the theme of the events, and they both turned out really well.

Thank you to both of these organizations for the opportunity to create for them.  It was both a pleasure and an honor!

Wife, Mother to two daughters, founder/owner of The Awakening Soap Company. Love to create:) Love our dog🐕! View all posts by LHM